Fatima, with the 2007 chapel in back and to the right, the Chapel of the Apparitions, built where Mary is said to have appeared to three children in 1917.

So maybe your next day away is far away? Across the country instead of across town. A thousand miles away instead of a hundred. In a place where they don’t know your language, much less your name.

Occasionally, we take a look at  tourist sites in other countries with a little practical advice for spending a day away — far away.

Fatima: Where the Sun Danced for Three Shepherd Children 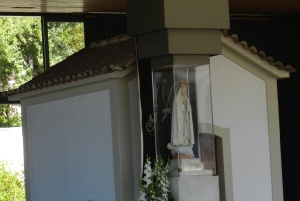 Inside the Chapel of Apparitions, a statue of Mary marks where the three children said the Blessed Mother spoke to them.

Miracles are said to have happened here, in this little out of the way village of Portugal.

In a turbulent time early in the last century, three shepherd children reported that Jesus’ mother Mary appeared to them. Today, that pasture has given way to a huge expanse of concrete — bigger than the square in front of St. Peter’s Basilica in Vatican City —surrounded by chapels and small shrines. The concrete has become necessary since as many as 4 million pilgrims come to Fatima every year, many on the anniversaries of the apparitions. A large crowd gathers here every October 13. The world’s eyes will be on the statue of Mary in the apparitions chapel when it will go to Rome at Pope Francis’ request this year.

Shopkeepers speak some English and are happy to help you find a memento for your Fatima visit.

As visitors arrive, their first sight is the town that has grown up around the square to provide shelter, food and all the trinkets a pilgrim could want — from rosaries to coffee mugs. No point in rolling your eyes at so much commerce in a religious site. The little restaurants within walking distance of the shrines are quite convenient and offer a place of rest and refreshment after the long walk between the shrines and the jostling of so many visitors.

Unless you plan to stay for Mass or confession, you can visit Fatima in a few hours. The trip is less than 100 miles from Lisbon and a little more than 100 from Porto. If you are planning to drive from Lisbon to Porto, it’s a quick detour and well worth it if you know the Fatima stories.

A visit to Fatima is a treat for the senses: the tolling of bells, voices raised in song, the smell of bees wax, as well as statues, artwork and shrines for the eyes to feast upon.

“The thing about being Catholic, it’s so tangible,” said Fr. Jesse Bolger, a priest of the Archdiocese of Baltimore. He took 22 pilgrims to Fatima in May — and joined priests in the procession for the Mass on the feast of Our Lady of Fatima. The congregation filled the square, he said, 300,000 strong.  He helped me understand while this out of the way place drew so many people. 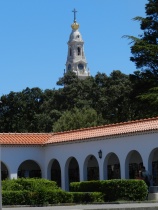 The spire of the Basilica of Our Lady of the Rosary of Fatima rises above one of the town’s shopping arcades.

Three shrines are must-dos. The Basilica of Our Lady of the Rosary of Fatima,  consecrated in 1953, the Chapel of the Apparitions, a low-slung building marking the spot where the children reported seeing their visions, and the  Church of the Most Holy Trinity built to mark the 90th anniversary in 2007.

Start at the Chapel of the Apparitions. It’s small, in keeping with the original site. With a little patience, you’ll be able to get pretty close to the statue. With a little luck, you might arrive as Mass begins — or, as I did, hear the voices of children raised in song.

The Chapel of the Apparitions

You’ll need plenty of time to visit the Basilica of Our Lady of the Rosary of Fatima with its 15 altars for the 15 mysteries of the rosary and the tombs of the three children. You’ll need your elbows, sorry to say. The crush from the zealous crowd makes a visit less than peace-filled. But, understand, everyone is here to see the same small shrines.

The tombs of Lucia, Francisco and Jacinta are popular sites inside the Basilica of Our Lady of the Rosary of Fatima

The Basilica of the Most Holy Trinity was built to mark the 90th anniversary. It’s a good place to stop for reflection.

The newest shrine, the almost-plain Basilica of the Most Holy Trinity, is marked with larger-than-life statues of two popes who visited the site: Paul VI came for the 50th anniversary in 1967 and John Paul II brought the bullet that nearly took his life when he was shot in 1981 — on the feast of Our Lady of Fatima. It is said that one of the messages of Fatima predicted that a bishop dressed in white would be shot.

Some pilgrims approach each of the three major shrines on their knees. They wear knee pads and a smooth path eases their way — but it’s still a long way to go on your knees.

The church has none of the “clutter” of old-fashioned churches. Instead, the focus is on the altar with a golden mosaic wall behind it. A simple entrance welcomes visitors through the sound of water — a symbol of cleansing — and there is a water feature that can only be seen from the lower level where there are confessionals (and restrooms.)

You will also see grateful worshippers making their way between the three shrines on their knees. A smooth path eases their way but it is nonetheless moving to see the slow progress as these devout souls endure hot sun and long distances. Fr. Bolger explained these pilgrims approach the holy places in a position of prayer, for themselves and for those in need of prayer. “It’s a humble love and action that we are in need of forgiveness,” he said.

In any cathedral, worshippers drop a few coins into a  box and light a votive candle. 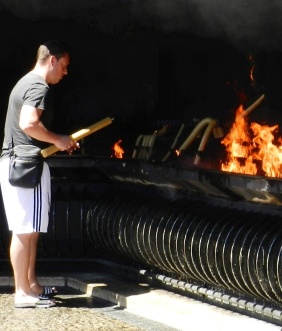 A pilgrim brings a candle.

At Fatima, they do it big.  For a couple of euros, visitors can buy candles as big as the Paschal candle lit for Easter. I saw men carrying candles like a shepherd’s crook, and as long as one. The “pyre” located behind the apparitions chapel burns brightly, thick black smoke rising above the square, the smell of burning bees wax filling the air. The fire is so hot, pilgrims often don’t bother to light their candles but instead just add them to the flames. Those signs of fire and water — the tangible signs of faith Fr. Bolger talked about — are what remain with me weeks later. “They both destroy and both give life,” the priest observed, “That goes with the message of Fatima.” 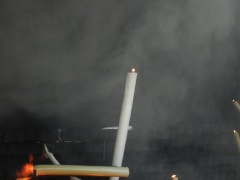 Some, but not all, of the candles make it into the candleholders.

6 responses to “A day away far away — Fatima”

Let me know if you've been here or shared a similar experience. Thanks for reading! Cancel reply

Writers In The Storm

Your online source for Jane Austen and her legacy