The Spencer-Silver Mansion is a beauty along leafy Union Avenue in Havre de Grace. A pretty B&B, too.

Have map and my fitness tracker, a cold drink and sturdy shoes. Let’s go

I could have walked 20,000 steps. Historic Havre de Grace has so much to see. The friendly gentleman at the Visitor Center had just the right walking tour to make this more than just a trek through town.

A thin blue line (mostly without the white label) keeps you going along the Lafayette Trail.

The Lafayette Tour is named for the famous Revolutionary War general from France, who named the metropolis at the confluence of the Susquehanna River and the Chesapeake Bay right off Interstate 95.

Start at the Visitor’s Center on Pennington Avenue. Get a brochure with map of the Lafayette Trail that will lead you all over historic downtown streets. And pick up the House of Cards Self-Guided Fan Tour, too.

The Visitor Center has a brochure that helps visitors get around the historic district, see the ornate Victorians, Italianate and Greek revival houses, peek into backyards. While I was counting down those 10000 steps, I also learned about the days when residents faced the British during the War of 1812, when a ferry, railroad and canal made this town so important it almost became the nation’s capital in 1789. As you know, Washington, D.C. won.

Union Avenue is a leafy street lined with gracious homes and a few very nice bed-and-breakfasts. It was the backbone of my tour since it’s the longest street with not a shop to stop at. I walked with purpose, stopping only to admire the Matilda O’Neill House, the 1822 home of a 15-year-old girl who saved her father’s life during the War of 1812, and the stone Spencer-Silver Mansion, a B&B with some eye-catching embellishments including a dormer, gables, and a tower.

The Maritime Museum — as well as the Decoy Museum — are located along the trail as well as the boardwalk promenade that stretches between Millard Tydings Park and the Concord Point Lighthouse.

At the southern end I got off the trail to take a look at the water view at Millard E. Tydings Memorial Park and to walk along the waterfront promenade, a boardwalk that leads to two museums well worth a detour. The Decoy Museum and the Maritime Museum. Admission to the decoy museum is $6. Donations are accepted at the maritime museum. I’ve seen both before a number of times but took the opportunity to slip into the maritime museum to see what was new and cool off.

The Concord Point lighthouse marks the end of the Susquehanna River and the beginning of the Chesapeake Bay.It is the oldest continuously operating lighthouse in the United States.

The promenade ends at the Concord Point Light. Open weekends, it’s a spot everybody stops at during a visit to Havre de Grace. It marks the end of the Chesapeake Bay — and it’s the oldest continuously operating lighthouse in the country. It’s easy to pick up the Lafayette Trail again. It winds through the shopping district, where you’ll find a couple of little shops and restaurants. I couldn’t resist Glyph, a card and stationery shop owned by two printmakers. 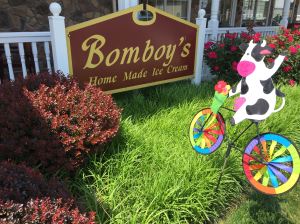 All roads on a hot day should lead to ice cream. I’ve walked 10,000 steps so I needed a bit of homemade Bomboy’s ice cream.

If you get hungry along the way, there are plenty of restaurants, including Tidewater Grille on the water and the always popular MacGregor’s on St. John Street and Laurrapin Grille on Washington Street. I’ve tried them all and liked them all. But I opted for ice cream at Bomboy’s. I also stopped for a make-your-own soda with club soda and syrups at Concord Point Coffee. Cooled me down in the sweetest way.

Pick up a button along with the House of Cards self-guided tour and you’ll be ready for the next presidential election. 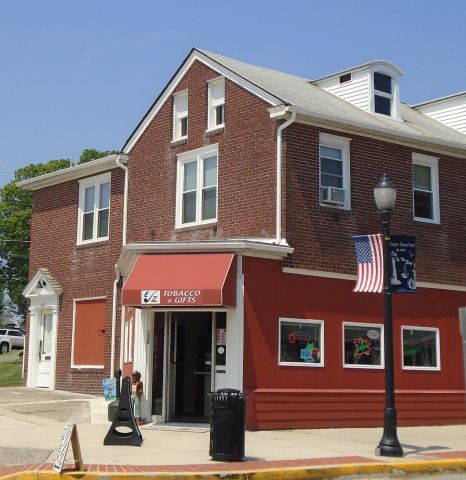 This tobacco shop on the St. John Street served as Underwood Campaign Headquarters in the Netflix Series “House of Cards.”

Let me know if you've been here or shared a similar experience. Thanks for reading! Cancel reply