I found images of Father Damien on both Maui and Molokai. I love this one, complete with lei, outside of one of the churches he built on the island of Molokai.

Molokai is a land of waterfalls, black sand beaches, rainbows and green-covered mountains. And a history of Hansen’s disease.

Images from my childhood continue to affect how I think about things even a half century later. That is certainly true about Molokai.

I remember learning about Father Damian (now Saint) back in grade school. We were taught about his sacrifices to help the people abandoned on one of the Hawaiian islands because they had the terrible disease then called leprosy. And I remember feeling sorry for the people left to suffer, but thinking living on a Hawaiian island wasn’t the worst thing in the world. Kids can be callous.

Finally, some 50 years later, I stepped onto Molokai with those childish images in my head and looked over a precipice to the spit of land where those suffering from Hansen’s disease were left to make it on their own or die.

You can walk or ride a mule down to the colony that is still home to people with Hansen’s disease (leprosy) or you can view it from Kalaupapa Overlook. It’s strangely affecting even from afar.

All it took was one look and I was overcome by the huge sorrow of what had happened to these people more than 100 years ago. Molokai is much bigger than a colony for Hansen’s disease sufferers. They were allowed to live on only one small flat bit of land jutting out into the ocean. The rest of this verdant land, a place of soaring folds of mountains, rainbows and waterfalls, belonged to others. A high cliff and the rough ocean waters separated the sick from everybody and everything else.

Molokai, however, remains a land set apart from the rest of the Hawaiian islands—only one hotel, few shops, restaurants or bars. Some of the roads we traveled were dirt.

Something unexpected: a kite factory.

It’s a quiet place, more remote than any place I’ve ever experienced.

And yet, so much is here.

We visited Purdy’s Farm, to see macadamia nut trees, learn how to crack their hard shells and taste them fresh from the shell.

We stopped at a coffee plantation for a cup of joe. 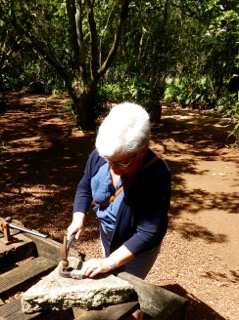 Macadamias are hard nuts to crack.

We stopped at two of the churches Fr. Damien built on the island outside of the leper colony — although only one was open for visitors. We even visited a kite factory.

Getting to Molokai isn’t easy. There are no ferries and when I called a couple of charter boats to take us there they declined, saying the water was too rough between Maui and Molokai. And we could have arranged for a helicopter fly-over–but that seemed a little too distant. I wanted to step onto the island and see it close up.

One of three churches Fr. Damien built outside of the leper colony.

So we flew. In a 9-passenger Cessna. I was scared, no denying it, but I ended up loving the  half-hour trip as we flew over scenery straight out of a movie.

We took an excursion that includes an all-day bus tour and lunch — but we could have as easily rented a car after flying. The only thing is, there are few signs on the roads. Our bus driver seemed to know where he was going and I was glad to relax and rely on his expertise.

There is one hotel so we could have stayed for a while. If I ever need to get away from it all, I may consider it. Molokai is beautiful.

If we came again, we could hike down to the Hansen’s disease sufferers’ colony. People still live there but now it’s because they have chosen to stay. Bus tours are forbidden but visitors may come down a single path, either on foot or by mule. I’m not getting on any mule—and I’m not sure I have the stamina for the climb back up that hill.

Beyond that, visitors can hang out at the beach, hike and walk, find a stand-up paddle board. Come in May and see the Hula festival. This, after all, is where the famous dance began.