The famous lions that greet visitors to the New York Public Library were decked out for the holidays.

A perfect time to see the sights of the Big Apple: holiday decorations and the Discovery Times Square Center’s Star Wars costumes exhibition.

And we did it with millions of our closest friends in 10,000 steps on an unseasonably warm Sunday in mid-December.

I come from a family that can’t get through the holidays without a visit to New York. It’s been that way for decades. A visit wasn’t complete without a stroll down Fifth Avenue, ducking into Saks Fifth Avenue, St. Patrick’s Cathedral and a few of the brands’ flagship stores. We even had our favorite restaurants.

The tree in Bryant Park surrounded by NYC’s skyscrapers.

But now with a member of the family living in Manhattan, we had a tour guide who steered us to a few sights we might not have even thought of otherwise.

We came by bus, one of the dozens of out of town buses that descend on the city filled with shoppers and theater-goers for a day of Manhattan’s delights. And 10,000 steps later, we got back on the bus, exhausted but quite content.

Lots of little stalls were set up in Bryant Park filled with all kinds of goodies: perfumes and socks, jewelry and chocolates.

Our walk began and ended at our bus stop, at  Eighth Avenue and 42nd Street. It’s a good spot, near Broadway, Times Square and Rockefeller Center.

The tree in Bryant Park surrounded by NYC’s skyscrapers.

We saw them all, but first we walked to Bryant Park to see the Winter Village,  the carousel and the ice skating. I could have spent an entire day — especially in this beautiful weather — going from stall to stall with a stop here for lunch, there for coffee. Maybe I’d have even laced on a pair of ice skates (even if it has been a few years.)

The three doorways of the library are topped with symbols of the three major religions, Islam, Christianity and for Judaism, the menorah for Hanukkah, which still had one night to go.

The bibliophiles and Ghostbuster/Sex in the City fans among us insisted on a stop in the New York Public Library. So many decorations to see, Christmas tree and Hanukkah menorah — even the lions outside the library had their own festive attire.

After breakfast (even though it was closer to noon) near Grand Central Station, we stopped in the terminal to see the holiday trimmings. I never knew there was a train museum, complete with gorgeous train garden. (It’s good to know a New Yorker when you’re visiting.) Grand Central is so big and so filled with people I never explored it before but I’ve got to recommend the train museum. (And the little shop P!Q, next door: great nerdy little toys.) 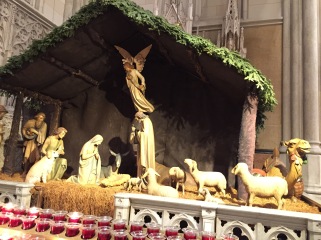 One of two Nativity scenes inside St. Patrick’s Cathedral on Fifth Avenue.

Our next stop was St. Patrick’s Cathedral, newly revealed after what seems like a decade under scaffolding. It looks brand new with color and light I’d never seen before. Two Nativity scenes, along with a profusion of flowers for Our Lady of Guadalupe (whose feast day was the previous day), made the church even more beautiful. 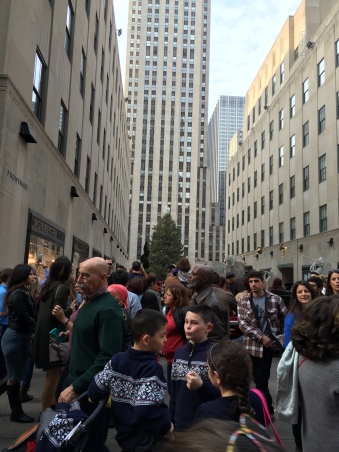 This is how close we got to the tree at Rockefeller Center. What a crowd.

Sure, we saw the tree at Rockefeller Center — but from afar. What a crowd surrounded it. And we know there were windows decorated for the season at Saks Fifth Avenue; we could tell by the lines.

So we enjoyed the unseasonably warm weather with a stroll down Fifth Avenue before heading back to Time Square to pay homage to Star Wars.

Discovery Times Square is located in the old New York Times building — which for me, a journalist for 35 years, was a thrill all by itself. But I grew up on Star Wars and so did most of our group. We had to see the costume exhibition. It featured Princess Leia’s white robes and infamous bikini and the eye popping wardrobe of Padme. Our favorite Wookie and drones were there, along with the kindly Yoda. 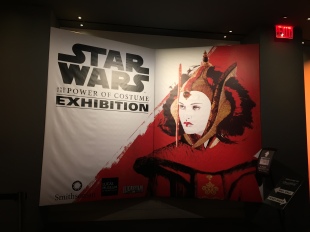 The exhibition is in the old New York Times building.

Costumes from the wedding of Anakin and Padme.

Storm trooper helmets. Lots of them. 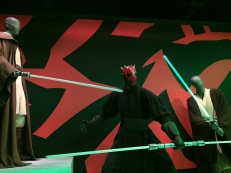 It was exciting seeing artifacts from one of the most fabulous movie series of all time. (Well, isn’t it?) It was also fascinating to learn about creative process, the inspiration, the thought that went into the clothes our favorite characters wore — not to mention how important the costumes were for helping actors keep in character when they were acting in front of just a blue screen. 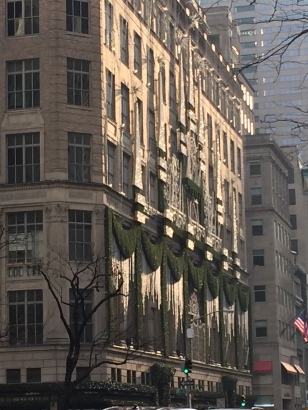 Saks always looks like a million bucks at Christmas time.

A thought-provoking end to our day. BTW — to really take in the whole exhibit schedule at least an hour, more if you are a photo junkie, want to peruse the gift shop or see the other exhibits (At this writing, The Hunger Games and Body Wars.)

We finished our day with a celebrity sighting. Bruce Willis had just arrived (or was he leaving?) at the theatre where he’s starring in “Misery.” I saw him, all right. At least the top of his head. What a commotion: hundreds of fans, hundreds of cellphone cameras up in the air. We dropped into our seats for the ride home, tired, happy. It took all day but we’d accomplished all we came for: including our 10,000 steps.

Long lines of people stroll past the decorated windows at Saks Fifth Avenue.