On the left Raven Beer’s Tell Tale Ale. On the right Pendulum Pilsner.

From tank to keg and bottle.

Quoth the Raven, “I want some more.”

Sorry, Mr. Poe, but if that big old bird Edgar Allan Poe made so famous could have quoth thusly during a visit to Peabody Heights Brewing, he would have.

Peabody Heights Brewing, located in an old soda bottling plant that was built on the site of the original Oriole Park in mid-town Baltimore, provides the space, the tanks and the machinery for a number of local craft brewers to make their beers and ales. These include Raven Beer and Mountain State, a West Virginia craft beer.

The big industrial-looking bar provides space for private parties and occasionally hosts local events. Tours in the future will be offered on a regular basis but until then they are by appointment only. I’d certainly round up 10 of my friends and call for a 30-45 minute tour and three samples of whatever is on tap. 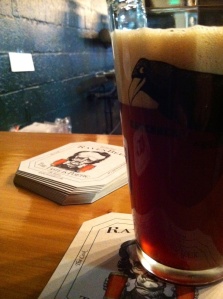 A holiday Cask made with extra spices and cranberries. More please.

During my visit (and it was “in the bleak December”), Raven Beer was on tap. About 50 percent of the brewing capacity is used for Raven Beer and that is being ramped up, according to our tour guide Steve (Raven Beer owner Stephen Demczuk). A new wittbier, appropriately named Annabel Lee, is on the way.

The regular brews are memorable —for their taste as well as their Poetic names. A light Pendulum pils is refreshing but I really go for the darker stuff and two made me run to get a case to bring home. The Cask is a dark and spicy double bock and at 8 percent packs a wallop. I tried their holiday Cask with spices and cranberries and wow, that’ll make you feel festive. While I may not want to drink this every day, I could be tempted with a Tell Tale Heart, a hearty (haha) IPA that’s rich and smooth and satisfying. 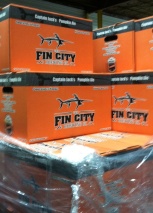 Fin City beer, an Ocean City brew, is also made at this co-operative brewery.

It’s interesting seeing so many craft beers in one place. The wide open plant makes it ideal for smaller brewers. This is no Anheuser-Busch, but still they have the space to make 1,000 barrels a month with plans for expansion, such as Raven Beer’s.

The scene at the bar at Peabody Heights Brewery.

I never would have known about Peabody Heights without an invitation. Thanks, Poe House. But once there, it didn’t take long to find a new favorite beer…happens every time I meet a new one.

Already I’m looking forward to another visit. And then there’s that case I bought. It waits — and I wait — for another night in bleak December.  No raven will visit that night; instead it will be one of celebration. Happy holidays.

Pendulum Pilsner is one of five beers made by Raven Beer.