Fields of poppies brighten the lawns in front of the Conservatory of Flowers in San Francisco’s Golden Gate Park. 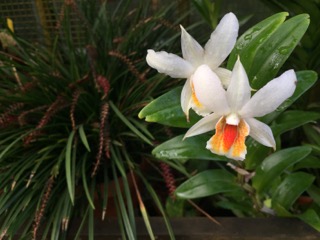 I was standing under massive palm trees, looking at how the stained glass windows splattered color all over their deep green leaves. And then it started to rain. I saw the little drops falling into the pond first and then heard that unmistakeable whisper of a rain shower. I never got wet, mind you. but for a few minutes the rain fell from the ceiling, yes the ceiling, to drench the tropical plants inside the Conservatory of Flowers in San Francisco’s Golden Gate Park.

While I was riding on the Hop-on Hop-off bus we drove through Golden Gate Park, whizzing past this long Victorian-style glass building. Among the flowering beds outside, visitors lounged on the lawns, reading, picnicking and playing with their children. 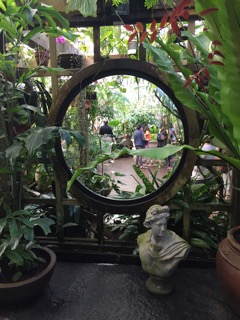 I had to stop. The domed glass structure doesn’t give away its secrets from the outside. You have to go into the white-washed  building to see the plants that represent every continent on earth.

More than 100 years old, it has suffered its share of disaster but the earthquake of 1906 wasn’t one of them. In fact, tents on its lawns sheltered refugees from the destruction.

Every step offers something beautiful. Although I missed the butterflies—wrong season— I came in time to see the orchids in bloom, from the familiar to the downright weird. 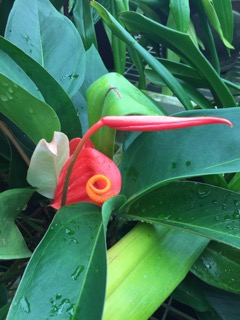 There were plants I never see where we get some of my favorite foods: bananas, vanilla and coffee.

There were flowers that dazzled with their color and shape.

I wandered without a plan, retracing my steps again and again to get another look at that red flower or that insect eating plant.

I love conservatories. I’m lucky enough to have Longwood Gardens practically down the street and visit as often as I can. And the Howard Peters Rawlins Conservatory in Baltimore is a gem that everyone who visits should see. 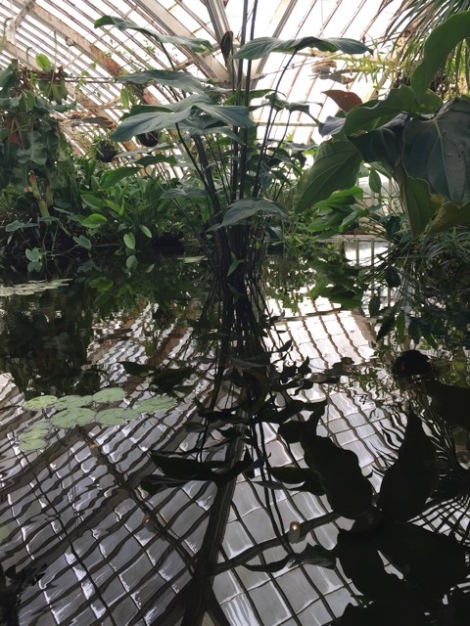 Until I rode past San Francisco’s conservatory I’d never heard of it. Others have: 2 million have visited since its restoration in 2003. And no wonder. With every step, I felt as if I’d found the Garden of Eden.

2 responses to “A palace filled with plants and flowers”