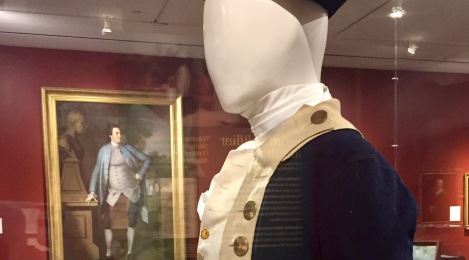 Tench Tilghman served as aide de camp to General George Washington for seven years during the Revolutionary War. He was one of the youngest aides of 32 who served beside the general. Tilghman carried the news of the surrender of Cornwallis at Yorktown to Congress in 1781.

Tilghman’s spurs are displayed beside his uniform at the Maryland Historical Society museum. His sword is on display in the State House in Annapolis.

Reading L.G. Shreve’s wonderful biography of Tench Tilghman for an upcoming novel, I ran across this quote, a tribute to loyalty.

“Perhaps a clue to the closeness of the relationship between Tilghman and Washington had its origins in the shortcomings of some of Washington’s other intimates, but it was cemented by Tilghman’s unfailing loyalty and his sense of the fitness of things.”

It seemed appropriate to remember the patriots of 1776 as we celebrate our nation’s independence today.

Shreve goes on to say Tilghman, a Marylander from the Eastern Shore, was one of Washington’s youngest aides and one of his longest serving. Washington had 32 aides, including Alexander Hamilton and John Laurens, the son of the president of the Continental Congress. Tilghman was part of the General’s family for seven years, until Mr. Washington resigned his commission as commander-in-chief of the Continental Army in December, 1783.

One response to “Postcard for the Fourth of July”