A snowcapped Pikes Peak appears behind the red rocks of the Gardens of the Gods in Colorado Springs.

What kind of a garden is fit for the gods? Apparently this one, a collection of jagged red rocks that rise from the valley near Pikes Peak. And no wonder! Although I was already breathless from the dry thin air, these rocky sentries towering above me left me in awe. 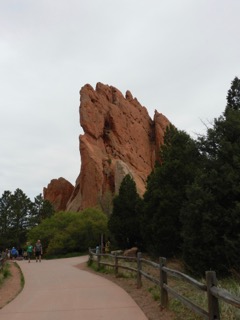 Some of the walking paths get steep (tough for those of us not used to the altitude). Most of the paths are easy and paved.

The Garden of the Gods is located nearColorado Springs, just off Route 25, about an hour and a half (with traffic) from Denver. And we did sit in serious traffic for a while to get here. Oh, but was it worth it.

Lots of the rocks have names. This one I remember: Kissing Camels.

The scenery in this 1334.64-acre regional park is spectacular. The walking trails are easy for all levels. Should’ve brought my rock climbing equipment…just kidding. That’s an adventure for other people — and there were people making their way up those sheer rocks.

The rocks were formed a few million years ago, long after the Rockies. In fact, the site of the garden may have been a sandy, inland sea until the ground beneath grew unsettled and the tectonic plates decided to switch things up a bit. (That’s my take on the geology I read.)

Here’s the thing. This is a place where you can spend an hour or spend all day. We took

A flash of black and white startled me. It was one of these, a black-billed magpie.

in the exhibits in the visitor center (Don’t miss the dinosaur) before taking a walk on the paved paths. I was there for the scenery and some pretty pictures. The paths were crowded with families, dogs and their humans, knots of young people and those aforementioned adventurers. Some brought picnics. Almost everybody had a camera. And certainly, we all enjoyed our day in the aptly-named Garden of the Gods.