The Raven passes Pier Five on her way back to the pier at the Inner Harbor. 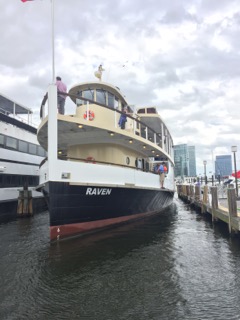 We were ready and waiting when the Raven, Watermark’s newest tour boat, arrived at its dock by Light Street.

On your right, the starboard side, is the Domino Sugar plant…

Family was coming into town and my father and his 90-plus-year-old sister wanted to show their visiting 90-plus-year-old sister how much the city had changed since they moved away. A tour by car might have gotten them closer to their old stomping grounds in South Baltimore, but a tour by boat, he decided, would show off the city’s best and newest and its best and oldest.

Turned out to be a wise decision. 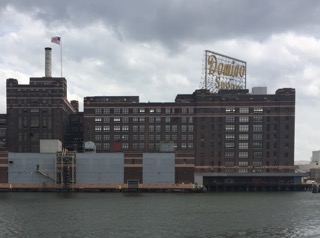 As we passed Domino Sugar, a ship was being unloaded. We could smell sugar in the air.

After a crab cake lunch at Bo Brooks, five of us boarded the Raven, one of Watermark’s short cruise boats. She’s a pretty two-level boat, the newest in Watermark’s fleet. Her sleek black hull and arched windows are reminiscent of old steamship lines.

But she’s no match in size or nostalgia for ferries of Baltimore’s glory days, such as the Smokey Joe that took my relatives to Love Point for a week or more at summer camp. They remembered those long-ago trips with such delight as they boarded the Raven to find a seat on the upper deck. It was going to be a day of reminiscing as they passed Domino Sugar, Locust Point, the church steeples, Fort McHenry. Every historic place already held a spot in my father’s or one of my aunts’ hearts. 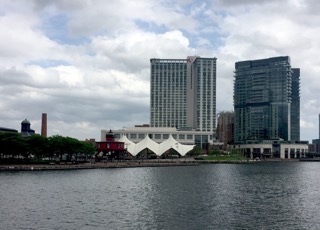 The tour really does offer lovely moments for those who are remembering their own history or learning something about Charm City  as the boat plies through the waters of the Baltimore harbor. In 45 minutes, we heard some pretty good narration about Liberty Ships, the Phoenix Shot Tower,  Fells Point and the War of 1812 — all the way to modern developments from Harbor East to Under Armour.

The ship is comfortable, roomy and even has a cash bar for those who need a little refreshment. Tables and chairs are scattered around both decks and there’s plenty of rail to lean on as you take in the sights. We didn’t have kids on our trip but I can imagine they’d love seeing the ships and lighthouses as well as the little sailboats skittering by. I expected a bit of a rough ride with the gusty winds we had had all afternoon. But the Raven cruised along, unperturbed. 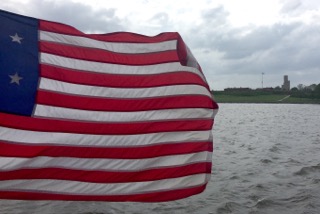 The Raven’s own Star Spangled Banner snaps in the wind as the tour passes Fort McHenry.

A lovely afternoon of memories and history.