You almost can’t get there from here. Tangier Island, a tiny speck in the middle of the Chesapeake Bay, far south where the bay is its widest, is more than an hour from the mainland. You have to want to go there. Buy a ticket and take one of the boats from Crisfield, Md., or Reedville or Onancock, Virginia.

Once there, you can stay for a couple of hours. Or bring your bags and stay as long as you like.

We took a ride on the Steven Thomas, which left from Crisfield. There are a number of boats, including a mail boat, that go to the Island. You can also get a ride from several places in Virginia.

On a recent sunny day, just after noon, we climbed aboard the Steven Thomas, a 97-foot boat with room for 300 people. It’s a big, comfortable boat with plenty of room on two decks, one inside and one outside. With only a few more than a dozen, we had our pick of seats.

It takes 75 minutes to get from Crisfield to the Virginia island. We had smooth sailing, with a warm sun and a cool breeze. There was plenty of time to admire the Chesapeake views. We caught a glimpse of a pod of dolphins (maybe they were porpoises, I never know.) and saw a lone pelican swoop down behind the boat. In all honesty, the trip was too darn quick. But we knew we’d have another one in just a few hours.

Had to have a crab cake on Tangier Island. We stopped at Fisherman’s Corner, one of several casual restaurants on the island.

Tangier may seem like it’s the middle of nowhere but it has had its fair share of attention over the years. Captain John Smith stopped by when he was exploring the Chesapeake Bay in 1608. By then it was a popular stopping spot for the Pocomoke Indians. The British stopped here during the War of 1812. For several years, people converged here for Methodist camp meetings. And for crab cake and soft-shell crab lovers, its shellfish are famous.

With the water table so high, many graves are covered with a heavy stone. You’ll also find family graves in some front yards, a testament to the days when this island was ravaged by epidemics.

We had only a little over two hours to visit the island. Of course, it wasn’t enough time to drink in all the old-fashioned goodness of Tangier. We saw plenty, thought, thanks to a tour by golf cart given by one of the islanders. We saw everything from the church to the school to the interesting graveyard during the 15-minute tour. (Really! 15 minutes)  Houses huddle together, with neighbors leaning over fences to shoot the breeze. Cars aren’t forbidden here — but most residents keep them on the mainland and use bike, golf cart or their own two feet to get around the island. It’s not that big, maybe a mile or mile and a half long and a mile wide. 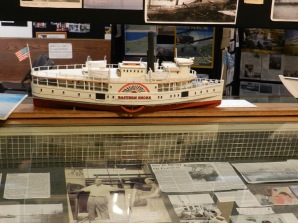 Still, there’s plenty of room for a couple of fun gift shops, restaurants, an ice cream shop, and  the Tangier History Museum. We stopped for lunch, took the island tour, bought souvenirs and got ice cream. We stopped at the Methodist church, a well-preserved building that’s served the islanders for more than 100 years. My only regret: I didn’t have enough time to spend in the museum. There were plenty of displays on the local fishing industry, the women of the island, the veterans, the schools — and lots more I missed.

For those who decide to stay more than a few hours, there are sunset and eco-tours, a beach, bed-and-breakfasts and plenty of places to wande

Tell you what. We talked about going back on our boat ride home. We found Tangier to be a friendly little island, different from Smith Island, its closest neighbor. But like Smith, it has a long history, a proud waterman’s tradition, and a lifestyle that may not last much longer. Population is dropping just as the island is sinking. It’s a place to be cherished.

If you decide to go:

We ordered our tickets online but the boat’s lone crewman said there is almost always space on the boat. I liked knowing I was committed to going. But if the weather may be iffy or someone isn’t sure they can go until the last minute, it’s nice to know you can always get a cruise ticket.