A charming mid-19th-century town makes Chesapeake City a fun little stop for anyone traveling through the area. It’s only a few miles off Interstate 95 and light years from its hustle and bustle.

A car carrier cruises down the C&D Canal on its way to Baltimore. A cool app called Shipfinder will let you know when a ship will be passing by.

This historic town near the top of Maryland’s Eastern Shore is defined by the canal that divides it and the bridge soaring above that unites it.

The town’s location also makes it an interesting place to spend a day, to relax, stroll, shop and eat. Even though it’s a teeny little town, it’s got a wonderful assortment of restaurants, some nice shops, a few well-appointed B&Bs — and that great view of the watery highway.

At Schaefer’s Canal House, diners on the verandah can hear the traffic crossing overhead.

I’ve been to Chesapeake City a few times — and I always discover something new. I remember dining at Schaefer’s Canal House many years ago. When a ship passed by, the house lights dimmed and the name of the ship was announced. They don’t do that any more but the restaurant’s canal side location offers terrific views of passing ships. Boaters dock here — and at waterfront restaurants on the other side of the canal — on their way through the canal. (I’ve sailed to Chesapeake City but never made the trip to the Delaware Bay. Someday….)

Most of Chesapeake City is on the southern side of the canal. But on the north side are Schaefer’s Canal House and the Ben Cardin recreational trail. It wasn’t until I was writing for Frommer’s that I discovered the south side of Chesapeake City — that’s where the shops and bed-and-breakfasts are, as well as the sweet waterside park known as Pell Gardens.

Part of the mechanism of the lock, now no longer used, is part of the C&D Canal Museum.

The C&D Canal Museum has some great little models of how the locks used to work — what marvels of engineering.

This time around I finally got a chance to visit the C&D Canal Museum — and if you have even an ounce of interest in things technological, this is your museum. I love to see how things work.Here you can see models of how a lock and the water wheel work — and then you can go see the actual items. Since the canal was widened, deepened and straightened out, everything is at sea-level now and the locks are no longer needed but it’s interesting, nevertheless.

Bring your appetite or bring a picnic basket. Chesapeake City has some delicious eateries. BTW — Hill Travel Centre, a local travel agent, schedules dine-around bus tours with courses at various restaurants in town. I arrived on a bus tour day and shops nor normally open were open because of the tour.

Some of the fanciful wares at Canal Lock Antiques. The oldest shop on Bohemia Avenue, it opened in the mid-1980s.

And bring your wallet. You’re going to want to stop in the local shops on and around Bohemia Avenue. I couldn’t resist My Jewelry Place, a jewelry shop in an old bank or the most senior shop in town, the Canal Lock Antiques.

Hours are limited in the off season (most are open Thursday though Sunday) but by the warm weather most shops open every day. 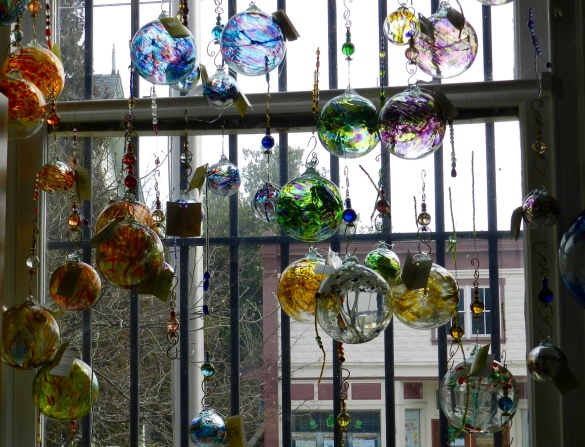 Glass globes hang from the windows of My Jewelry Place, a shop housed in a sturdy old bank.

2 responses to “Chesapeake City: town at a watery crossroads”

Writers In The Storm

Your online source for Jane Austen and her legacy