Surfers get a few more rides in as the sun sets over Tamarindo, a heavenly beach on Costa Rica’s Pacific coast.

What makes la playa at Tamarindo so special? 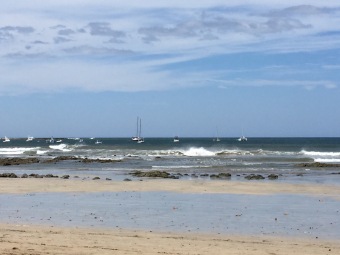 I didn’t realize how rocky the beach was until a very low tide revealed the ocean’s secrets.

It could be the snorkeling in ever-changing blue Pacific waters, meeting the denizens who live deep in the ocean among those lava rocks: puffer fish and star fish, blue fish and yellow fish.

Or is it the sunsets that stop everyone in their tracks each evening? Watching that glorious orb drop into the Pacific Ocean never fails to take my breath away.

Surf’s up and class is in session. (Don’t look for me in that crowd; there’s one sport I’ll leave to others.)

On a lazy afternoon, it’s probably the wind-ruffled palms and matapalos whispering, “Relax….”

Add in the dazzling array of seashells (which must be left on the beach, according to Costa Rican law), the occasional iguana that stops to see what you’re up to, the variety of water sports just begging to be enjoyed.

Spent a February week in 90-degree sunshine, entranced by Tamarindo. After a few days in the glorious Monteverde Cloud Forest where temps were more in the 60-75 degree range, we were ready for the heat, the sunshine, the ocean. 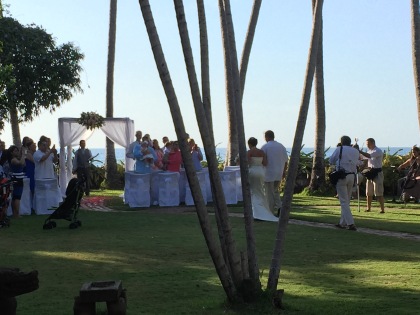 From our own porch, we watched a lovely couple make their beachfront vows.

Tamarindo is a small town in the middle of Costa Rica’s Pacific Coast. When you decide to go to the beach in Costa Rica, you have to choose Pacific or Caribbean. Since we were flying in and out of Liberia, we chose the Pacific coast and our trusty travel agent recommended Tamarindo. The town has one main road and plenty of surf shops, restaurants, bars, a craft brewery and shops to keep a person quite busy.

We stayed at the Tamarindo Diria because we liked its beachfront location. After a few days we knew we had picked the right place. Besides its killer views, it boasts several pools, a casino (where we never visited), a wonderful bar with a couple of bartenders who truly know their craft (Say hello to John and Sergei for me) and several restaurants. My favorite was Matapalo, a beachfront restaurant I could have visited every single evening.

Costa Rica law forbids taking shells from the beach. I put these right back!

Lazing on the beach or by one of the sparkling pools took up a great deal of time. I found wandering among the lava rocks at low tide fascinating. And though I’m a big seashell collector (See post about Sanibel) I did the legal thing and left the pink and purple shells and the “unicorn horns” that really belong to little snails. It’s illegal to take them. So I took their picture and put them back.

The volcanic rocks that tumbled into the ocean have left fascinating structures, including this hole just off Honeymoon Beach.

Of course, I had to get in the water and snorkel! It’s one of my favorite beachy things to do. Luis, our tour guide with Arenas Adventures, took us to a rocky area off Flamingo Beach (the next beach over from Tamarindo) far from the crowds where we saw royal blue starfish and a spidery black star fish, puffer fish in blue, yellow and spiny. We visited Honeymoon Beach, a deserted stretch of beach where turtles lay their eggs. We found a rock filled with dark gray crabs and star-shaped mussels. We saw frigate birds and pelicans — all in three hours.

I know why I added a few pounds during my visit. Ohhhh, the food.

Pangas Beach Club, set right on the beach with a fire pit and strings of twinkling lights, serves its steaks on hot lava rocks that arrive sizzling and smoking to your table. Gimmicky? Maybe. But the food is expertly prepared. The steaks are seared and sliced and ready for a little extra warming on that hot rock. Three decadent sauces accompany the entree and they’re so good I wanted to lick every bite. We liked this place so much we came here our last night.

For romance mixed with culinary creativity, there was none better than La Plumeria. A thatched-roof pavilion set in a garden by an aqua pool, this restaurant mixes local flavors with a French elegance that made it one of the most wonderful experiences of our visit. I’m a sucker for a flower on my plate, especially when that plate is filled with fresh, yummy food.

It’s all over now: a trip we decided on a year ago. Costa Rica has won a special place in our hearts for its beauty, its sensitivity to the environment and its people. Mucho gracias, Costa Rica.

These scissor-tailed birds are called frigates.