Where’s Nemo? And the puffin? And lots of sharks and frogs and eels and scarlet ibises? At the National Aquarium in Baltimore at the Inner Harbor. 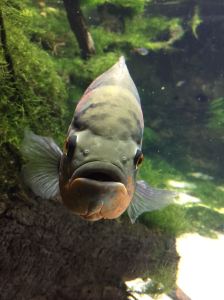 How close do you want to get to the fish?

Sometimes you need to get lost in the beauty of the earth. Gardens are good for that, so are beaches and forests, mountains and deserts. In the middle of Baltimore City, on a dreary day, or a hot one or a cold one, I find the place to be is the National Aquarium in Baltimore. 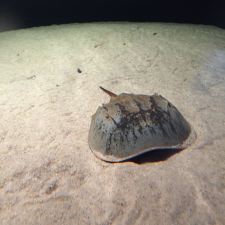 A horseshoe crab scoots along the sand in the Living Seashore touch tank.

The aquarium is always changing and always the same. I know I’ll find the scarlet ibis perched on a branch high in the rain forest. I know the sharks and clown fish will swim circles around me in the ring tanks. The puffins are always charming. The moray eel always a little frightening.

Go ahead. It’s OK to touch the animals in here.

And there’s always something new that draws me in again. This time it was the Living Seashore touch tanks. I was excited for this one because many years ago I was a volunteer here and got acquainted with the horseshoe crab. Scared at first by its spikes and sword-like tail, I learned to love the slow-moving armored vehicle.

New touch tanks give visitors an opportunity to touch the jellies. Don’t worry; these won’t hurt a bit.

The new touch tanks are bright with lots of room and interesting creatures to see — including my friend the horseshoe crab. One whole tank is filled with ghostly globules. I’m not touching the jellyfish but I was assured they wouldn’t sting me like the ones in the Chesapeake Bay. Maybe next time. After all the fish behind glass, it’s nice to get a little closer, isn’t it?

The sharks swim in a ring tank under a display of lit shark cutouts.

Everyone has a favorite at the aquarium. I could spend all day among the twittering birds of the rain forest. And there’s something about the ring tanks where sharks patrol. The puffins never fail to charm with their good looks and their speed underwater.

There’s a lot to take in at the National Aquarium. You can visit Australia, a land of fire and water. Stop to see the dolphins. Take in a 4-D immersion movie. Stop for lunch. Shop for water-related souvenirs. And you’re going to want to take your time. It’s not easy finding the bird in the rain forest whose call will make you jump. Go ahead; jump in. The water’s great.

The tiny fish among the spikes of the anemone make this a sight to behold.

Brightly-litish tanks on the middle floors shine in the dimly-lit halls.

I had to take this photo. The ticket line used to be so long. Now you can buy your tickets on line. 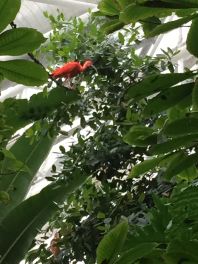 The rain forest habitat, in the glass pyramid at the top of the aquarium, features both fish and birds, as well as a usually-well-hidden sloth.

Graceful and colorful fish glide past in the coral reef tank.