Carroll Creek Park stretches around the south side of downtown Frederick.

Rose Hill Manor children’s museum is open only for special events in winter. But the park is open in daylight hours.

Cabin fever had set in. I needed green spaces and new things to look at. Since I had a friend to meet for breakfast in Frederick, that’s where I would spend my day away.

I wished I had a couple of little kids to take along with me for this would have been a fun day for children.

In the past, I’d certainly spent wonderful days in the past taking a mini-van filled with children to see Rose Hill Manor, prowl the historic downtown streets, find an ice cream cone and run around Baker Park. 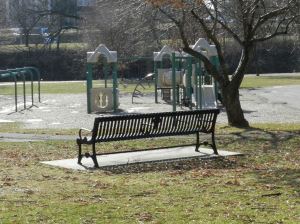 Baker Park has plenty of space to run around and a playground for the little ones.

No kids this time, but I still found places I’d bring kids to see.

The parks, of course. Baker Park is big and wide open with a great playground. Carroll Creek Park winds its way around town with lots of bridges to cross. Originally built to save the town from the kind of flooding that devastated the town in the 1970s, it’s a pleasant place to stroll.

It got too cold for outdoor activities and I headed to a small museum that turned out to be pretty cool. Bjorlee Museum combines history of the Maryland School for the Deaf with an unusual collection of interesting old stuff, the kinds of things that would spark a good conversation with a curious child. 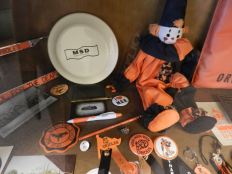 Maryland School for the Deaf has school spirit.

Bjorlee Museum at the Maryland School for the Deaf has all kinds of amazing little souvenirs, including this snippet of fabric from a plane from Admiral Byrd’s South Pole expedition.

Some of the collection were directly related to the school — uniforms the boys used to wear, a pretty white graduation dress, books and desks, class pictures and photos of the grand old Victorian building.

There were pieces of furniture, a weather vane, old spinning wheels and sewing machines, toys and baby cribs that may have had some connection to the museum but I’m not sure. Signage isn’t great. And I was handicapped since the major form of communication is sign language. Since the museum is small I called ahead to be sure someone was available to let me in. I’d advise that. I’ve seen some pretty good small town museums from Cumberland to Berlin (Md.) This one, which combines the school’s history with pieces that recall bygone days in Frederick, kept me captivated. 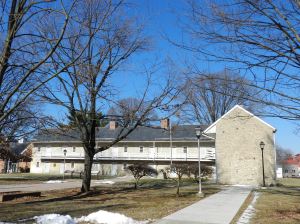 The Hessian Barracks, on the site of the Maryland School for the Deaf, housed Hessians POWs during the Revolutionary War, French sailors captured by the USS Constellation in 1799, and US troops during the War of 1812 and wounded soldiers from both sides of the Civil War. Supplies for Lewis and Clark’s expedition were stored here. And for a time silk worms lived here. It became the Maryland School for the Deaf in 1868.

If you’re timing is right, you might get a chance to step inside the Hessian Barracks, a long stone building that’s seen lots of history since it was built during the Revolutionary War. Inside are a collection of guns and bullets and a handmade flag.

I’d like a seat at the pizza bar to watch the pizzas bake.

After all this touring, a kid’s gotta get hungry. I liked the updated diner style of Family Meal, where I stopped for breakfast. But pizza fans will want to opt for Pistarro’s with its bright red Italian brick oven, where generous-sized pizzas  sizzle at 850 degrees.