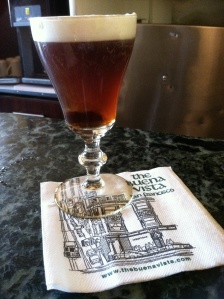 The first Irish coffee served in America was made here in 1952.

One last day in the city by the bay, we had to make the most of it — so we opted for a hop-on-hop-off bus tour to get a glimpse of parts of town we hadn’t been in and jump off when we felt like it. The rain ended up coming down so hard we didn’t get off until we got hungry.

Without knowing it, our culinary tour of San Francisco had begun.By the end of our day we had found three spots of historical significance — gastronomically speaking.

First stop, lunch at Tadich Grill. Started during the gold rush of 1849, it has moved, expanded, fought over its name, underwent changes of ownership. Yet it has remained in constant operation in all that time.

Now, don’t go looking for miners and ruffians. Times of changed — although not too much. The present Tadich Grill is an old-fashioned lunch counter with tables and booths around one side of it. Heavy wooden counters, waiters in white coats, shared pitchers of cream remind me of a mid-20th century department store restaurant. No reservations are taken and the place did fill up for lunch while we were there. Waiters called customers by name, although we certainly weren’t the only tourists there.

Lunch at the counter.

The menu is extensive (and expensive for a place like this.) You can get anything from Dungeness crab to meatloaf. We saw plates piled high with food and the chef salad and pot roast we ordered were too plentiful to finish. Hearty honest food, I’d say. History is the main reason to stop here.

Glasses are on sale at Buena Vista’s shop around the corner from the restaurant.

When our day of hopping on and hopping off was done, we ended up at Fisherman’s Wharf, and we visited two more historic sites. We had to try an Irish coffee at the Buena Vista Cafe The story goes that after much experimentation with whiskey and cream, the first Irish coffee in American was served here in November 1952. They have developed their own special recipe, which they willingly share. And you can even buy copies of the recipe, the glasses and the whiskey in the adjacent shop.

And the Irish coffee? Worth the trip to the Buena Vista. The glasses are small (you might need to order two), but the dark coffee, the thick cream and the dose of Irish whiskey add up to a fine refreshment on a cold day. 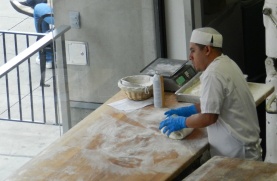 The baker can look out the window as he kneads the bread — and passersby can watch as he does it.

But we had a little more time before our day came to a close and Boudin Bakery was right down the street. This turned out to be our favorite stop of all. You can buy a loaf of bread here (and plenty of other good stuff) or you can climb the stairs to see the little museum and watch the bakers create hundreds of loafs of bread a day. In a hurry? Stop by the window to watch a baker knead a mound of dough.

How they used to deliver bread. You needed a nail on your door.

The museum has lots of interesting information about the business — Boudin is another gold rush veteran, along with Ghirardelli Chocolate, Del Monte and Levi Strauss. Boudin has the only factory still in SF, however.

Kneaded dough makes its way down the chute into a contraption (that’s a technical term) that will create round loaves of sourdough.

Take your time. There’s lots to read, samples of sourdough to taste and then the whole bakery is there at your feet. Watch the “mother dough” come out o the vault. Watch the bakers knead the dough and see enormous mounds of dough transform into fragrant, golden rounds of San Francisco’s signature bread.

Hungry yet? I am.