Hold on. That’s me at the wheel.

The tour stops here — at a location used in The Descendants.

I think the Speed Racer helmet gave me the courage to climb behind the wheel of a muddy squat cage on four fat tires. Without the comfort of the heavy, well-padded topper, I’m not sure I could have piloted my ATV down those steep, rutted hills and through the rain forest of Kauai. 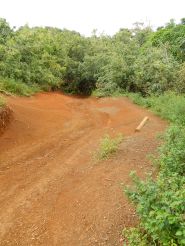 That first hill is steeper than it looks here.

But there I was, last in line of the tour through locations used in  Jurassic Park, M*A*S*H, Raiders of the Lost Ark and The Descendants, thanks to Kipu Ranch Adventures.

Now I’m not the most adventurous of drivers. I get nervous driving highways through the Appalachian Mountains. I keep my speed at the speed limit — sorry all you speed demons behind me. I stay off the road in blizzards, hurricanes and torrential downpours. I ski slow — though I do like to sail fast.

So what was I doing behind the wheel of an ATV on a drizzly afternoon in Hawaii? Trying something new. Isn’t that one of the key goals of travel?

I’ll never forget that first hill. Guided by our capable, confidence-inspiring guides Ryan and Giggles (Thanks, guys!) and assured our vehicles weren’t going to roll, we inched down the muddy path. All I saw was the deep red mud of Kauai, a rough path with a deep gully down the middle, filled with curves, rocks and certain danger. I think I left fingernail marks in the steering wheel as I rolled carefully down the slope. 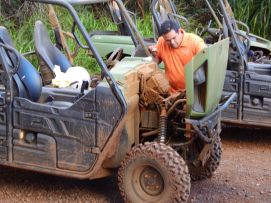 My engine overheated near the end of the tour but Giggles got it running soon enough. 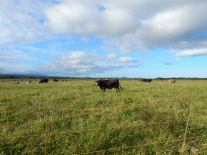 The tour gets started on the flattest part of the 3,000-acre cattle ranch.

Heart pounding, sweat rolling down my back — where were we again? Once past this hurdle — the steepest, scariest slope of the trip, we were assured — I relaxed and took a look around.

If I can drive an ATV, I might as well try out the rope swing, ala Indiana Jones.

From that moment on, the tour became fun. I picked up a little speed. I think I traveled at a breath-taking 6 mph at first but by the end was cruising at, oh, twice that! I know, wild and crazy, huh?

The hills, both up and down, were fun. The paths traveled through lush tropical forests as we splashed through creeks, cut across scenic ridges and dodged a splatter of mud and the occasional raindrop. I found myself relaxing. I even looked around and checked out the scenery as I drove. We stopped to enjoy the view a couple of times.

One stop took us to the edge of a river where a rope swing hung — just where Indiana Jones escaped hostile South Americans in Raiders of the Lost Ark. Yeah, it was filmed right here. Another took us to the very spot in The Descendants where George Clooney talks about his family’s property on Kauai. A vista of mountain, rolling hill, and aquamarine water crashing against lava rock, it is also a sacred Hawaiian site.

Sure, my heart continued to pound in my chest — but it wasn’t fear fueling it anymore. Turns out I like driving off-road.

After climbing through the forests of Kipu Ranch, you end up on ridges high above the valleys of beautiful Kauai.