Rent a kayak at Manatee Park for an up close view of manatees in the Orange River.

Fort Myers is so much more than a beach. It’s downright wild — with manatees warming themselves in a canal near a power plant, little screech owls staring back at me and winning my heart, exotic forests warming my winter-weary soul and remnants of a garden once tended by a community seeking utopia. 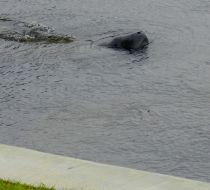 I never thought I’d get a thrill seeing a nose. But when this one appeared a few feet away, I was delighted.

I saw a manatee once, in a tank at Walt Disney World a decade or so ago. But in all my visits to Florida, I never saw one in its own habitat. Until I heard about Manatee Park. From November through March (if the weather is cool), these big marine mammals gather in the warm water of a canal near the power plant. On the day I visited, park staff had counted 300. I saw dozens. With every appearance of a fluke, a back (many of them scarred) or a nose, I was thrilled. And so were the scores of visitors who delighted over each appearance with me.

The park is free, except for a nominal parking fee. There is a walkway along the canal to visit all the manatees warming themselves. A fence at the mouth of the canal keeps humans out so the canal is always a safe place for the animals. A boardwalk takes visitors along the Orange River to see manatees in their natural habitat. There’s a gift shop, a continuously-running video, a playground, picnic tables and a kayak rental.

Next time, I think I’d like to join the kayakers hoping for a close encounter with the manatees. I heard one kayaker bemoaning the fact she hadn’t seen any manatees — even though we could see them very close to her kayak. Minutes later, she steered her kayak right over top of one. The manatee, apparently surprised, rocked her boat. She screamed — and had a story to tell. 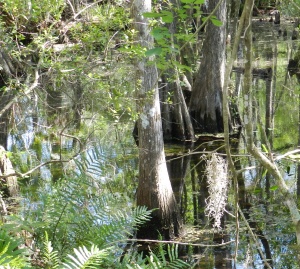 What is a slough anyway — and how the heck do you pronounce it?

As much as I liked Manatee Park, I found this one even more intriguing. A protected wilderness area on the outskirts of Fort Myers — and very close to the airport — the Six Mile Cypress Slough Preserve’s green spaces are balm for my frostbitten psyche.

The Slough (Pronounced “slew”) is a 2,500-acre wetland. It’s actually nine miles long and a third of a mile wide. Packed with all kinds of plants and animals, it’s filled with water some of the time and dries out in other parts of the year. And it’s fascinating.

Some birds, like this white egret, seem to pose for photos.

The boardwalk past cypresses, hanging moss and ferns is best seen with a tour guide. They are knowledgeable, patient with all my questions and have a keen eye for the turtles, birds, and shrinking violets you might have missed walking the path on your own.

Like Manatee Park, the visit is free though parking costs a few bucks. What a bargain, snow birds. 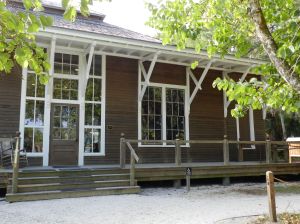 Art Hall is still the site of Sunday musical performances at 1:30.

For something entirely different, you have to stop bypassing Koreshan State Historic Site, a state park adjacent to the Tamiami Trail (Route 41).

This historic site remembers a group of men and women who settled here to live out a kind of utopian existence. The Koreshans had their own unusual belief system even as they developed gardens filled with exotic specimens and local beauties.

Buildings of the historic settlement are scattered among the palms, ferns and tropical plants from all over the world.

Take a guided tour of the settlement to gain some understanding of what drew the Koreshans to this area and learn how they lived. If plants are your thing, botanical tours are offered on Tuesdays. Demonstrations on cooking, baking and their enormous machine shop and generator are also scheduled. I joined a tour that lasted an hour and included a look inside the buildings, a walk along the green paths and a visit to the generator and machine shop. There really was something for everybody’s interest.

Kayakers can bring their boats or rent one here to explore the narrow winding Estero River.

Admission here is $5 a car and the tours are another couple of bucks.

One of Calusa’s screech owls. I have to stop to see these.

I never know what to make of Calusa Nature Center and Planetarium (and I’ve never yet gotten to the planetarium.) It’s clearly a labor of love but it doesn’t have the spit and polish of these other nature preserves. It’s privately owned and operated, and according to a brochure, about to begin a much needed capital campaign.

I go for three reasons. Most importantly, I have to see the screech owls, brown and white speckled birds that would fit in your hand. One of them always looks at me with its big black eyes and “talks” to me.

Then I have to visit the bald eagles. These sad but proud creatures were seriously wounded in the past. Here I can see one close up and that’s pretty awesome.

One of several bald eagles at Calusa.

Then I like to squirm when I see the boa constrictor, the python and the other reptiles. There are a variety of other animals both inside and out with  pigs, raccoons and armadillos. An aviary houses some pretty impressive hawks, eagles and vultures. Once I was able to see butterflies in their butterfly aviary. The other times it was too cold.

During my last visit, I was able to catch one of the presentations on the animals there, complete with the opportunity to pat a small alligator.

Next time, I’ll have to make time to see the planetarium. I don’t know what I’m missing.