Lighthouses, new and old, at Cape Henry, where the Chesapeake Bay and the Atlantic Ocean meet.

Beyond the beach, beyond the sand and even beyond the boardwalk, there are some fascinating ways to appreciate the power and glory of Mother Nature in Virginia Beach. No matter the season, visitors have an opportunity to appreciate what’s living under the sea, what’s growing on the land and one way the human race has tried to warn each other of nature’s dangers.

On a recent visit, the weather was a little too cool for the beach, but it sure was lovely for a weekend of strolling, sightseeing and, of course, eating.

At Cape Henry, two lighthouses stand sentry at the confluence of the Chesapeake Bay and Atlantic Ocean. The newer black and white one is still in operation while the older brick lighthouse is open to visitors. Built in 1792, it is the first structure the new United States government authorized. And since then, it has stood watch, keeping ships safe. And in fact, it remains on the nautical charts even if its light isn’t still in operation. 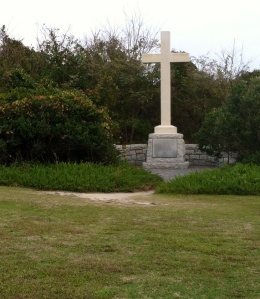 Virginia’s first settlers stopped here in 1607 before settling in Jamestown.

Eat your Wheaties, put on your walking shoes and grab your water bottle. It’s a long way to the top and you’ll be glad you climbed all those 191 steps. The views are spectacular. You can see out to the Chesapeake Bay Bridge Tunnel and don’t forget to look for the cross commemorating the space where in 1607 the first settlers landed in Virginia. Nearby is a statue of Admiral Francois Joseph Paul de Grasse whose blockade here during the Revolutionary War led to the surrender of the British at Yorktown. You can also walk to these monuments and a nearby boardwalk overlooking the ocean.

The lighthouses are located on a military base so visitors over age 15 need photo ID and drivers need vehicle registration and proof of car insurance — and expect to have your car inspected.

New Earth Farm, an organic farm in nearby Pungo doesn’t just grow vegetables. It tries to make a difference. Saturdays are the best day to visit when there are tours of the fields and the farm stand with local produce and prepared foods is open. If cooking is your thing, check out their Facebook page for upcoming classes. 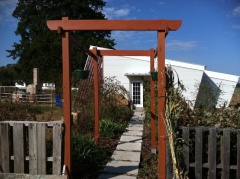 The herb garden borders the walk to the classroom building, where you’ll also find a solarium that provides passive solar energy.

It isn’t often you can just wander around a farm, see the ducks and chickens — and see where dinner really comes from. But this is the real deal.

Now I’ve saved the best for last. In two buildings, Virginia Aquarium & Marine Science Center introduces visitors to everything from Komodo dragons to river otters to cow-nosed rays that want you to pat them. (Go ahead. It’s kind of cool — and slimy.) Not a fish person? Then you’ll love seeing the gigantic lizards, maybe the snakes, the loggerhead turtles, and all the birds in the aviary.

The whole place is dazzling with fishes of all kinds of colors, the occasional diver in the tanks, movies and other programs. It’s all very educational, of course, and the exhibits are packed with explanations. While they are great, my favorite learning aids were the laminated cards you could pick up and figure out the names of all the fish swimming by.

Gotta love the turtles at the Virginia Aquarium and Marine Science Center.

Don’t miss the baby turtle nursery. They are as cute as the little dude in “Finding Nemo.”

A sculpture of the river otters stands outside the Virginia Aquarium’s Marsh Pavilion.

Got lots of time? Walk the nature path between the two pavilions. Of course, you can drive between them; and there’s plenty of parking.

Sometimes, the tanks have humans as part of the exhibits at the Virginia Aquarium.

I recently wrote about another Virginia Beach attraction as part of my Tipsy Tourist column: