Look for the red, white, and blue bus stop signs — or if you don’t see one, just wave your hand when the Annapolis Circulator is approaching.

It’s good advice if you want to catch the free Annapolis Circulator while you’re visiting the historic district.

The Annapolis Circulator connects the four city garages:  Noah Hillman, between Main and Duke of Gloucester Streets downtown, and three down West Street: 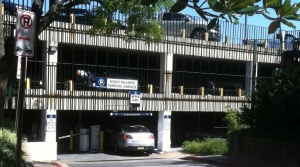 The Noah Hillman Garage is right in the historic district between Main and Duke of Gloucester Streets.

Visitors coming to Annapolis may prefer not to bring their cars into the historic district at all — especially when there’s bound to be a crowd such as the U.S. Powerboat Show and the U.S. Sailboat Show in October or during f the U.S. Naval Academy’s Commissioning Week in May. On weekends like these, it’s best to park (for $5)  at the Navy-Marine Corps Stadium, catch the shuttle  for $2 and get off at Church Circle. Then to get down to the City Dock or around to the shops, restaurants, and historic sites in the historic district and on West Street, catch the Circulator.

The Circulator’s run is actually pretty limited. It goes down Duke of Gloucester, stops at the Marriott and the foot of Main Street — both near the City Dock. Then it heads up Main Street where it stops again on Church Circle.

Stop at the Marriott if your destination is Eastport. Walk over the Spa Creek Bridge to get to the Eastport restaurants, B&Bs sailing schools and boating-related shops.

At the foot of Main Street you’re across the street from City Dock and Ego Alley. And you’ll find nearby the Market House, the U.S. Naval Academy, Annapolis Summer Garden Theatre (open only in summer, of course), and plenty of restaurants, watering holes and shops. Fan of Alex Haley? Stop and see the City Dock story wall on Kunta Kinte.

Stop at Church Circle at the top of Main Street to go to the State House, St. Ann’s Church, or visit all the historic sites and shops around Maryland Avenue.

The Circulator heads both east and west on West Street, going past several hotels and plenty of shops and restaurants.

Now if you’re headed to one of the West Street eateries, bars or hotels — and boy, are there a lot of them — stay on the Circulator. It goes all the way to the Westin before turning around and heading back downtown.

The Annapolis Visitor Center is just a few steps off one of the Circulator’s stops on Church Circle.

In addition to the Annapolis Circulator, participating restaurants sponsor e-cruisers (see their Facebook Page). These little six-person golf-cart-looking vehicles will transport you to and from dinner.

Need more information or help during your visit? Make sure to stop by the Visitor Center on West Street (beside one of the town’s garages.)

One response to “Getting Around Annapolis”