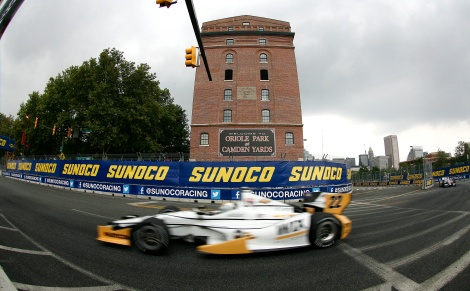 An Indy Car makes the turn around the Warehouse at Oriole Park at Camden Yards.

Editor’s note: The 2013 edition of the Grand Prix of Baltimore is now but a memory — and it has been announced that it will not return. It was fun while it lasted! Thanks for stopping here!

Slick, open-wheel cars, Porsches, Maseratis and plenty of other high-octane racing cars will race Baltimore’s city streets at speeds of up to 180 miles an hour August 30-31 and September 1.

These drivers will make it look easy to get around town. But what about the rest of us?

Race fans, here are a few essentials for making the most of your visit for the Grand Prix of Baltimore.

1 Cars are the main attraction. 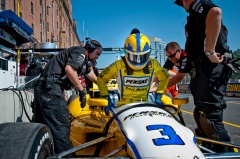 Indy Car teams prep for the start of the race beside Oriole Park.

Three kinds of cars are racing in the Grand Prix, four if you include the Pinewood Derby cars, according to Dave Curley, who’s handling PR for the Grand Prix.

The IZOD Indy Cars are the open-wheel racers that you see at the races such as the Indianapolis 500. Big wheels, no fenders, they just look fast. Besides the IZOD Indy race, younger drivers will test their mettle in the Firestone Indy Light Series. 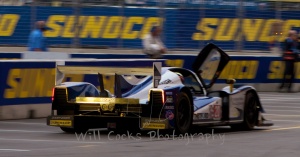 The American LeMans series will also feature the Porsches, along with Maseratis, Vespers and other fierce sports cars. This is where power and speed meet luxury.

They all race on the same track through downtown Baltimore.

2 Where will the cars be? 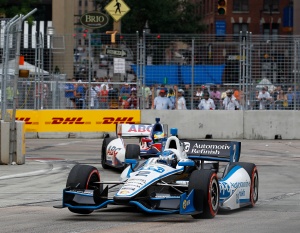 When they aren’t racing, the Indy Cars will be in their paddock in the Convention Center. You’ll need a separate ticket to get in — but admission to the LeMans paddock is part of all ticket privileges.

When they aren’t on the street, the cars will be in “paddocks.” So if you want to see the teams getting the cars ready for the road, stop by the Convention Center (across the street from the start and finish line) to see the Indy Cars. The LeMans cars will have their own paddock between the Orioles and Ravens stadiums. Pit row is down that way, too.

The LeMans paddock is open to all ticket holders but to see the Indy Cars in the Convention Center, you need a separate ticket.

You can buy different tickets for different days, different views at varying prices. Friday’s $15 general admission ticket will let you sit anywhere in the grandstands to watch practices and qualifying races all day long. 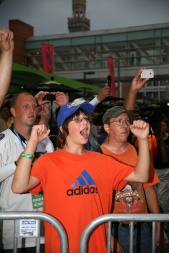 All Friday tickets are General Admission. Friday and Saturday ticket prices depend on where in the grandstand you want to sit. General admission is available, too.

Crowds in previous years were smallest on Friday and veteran race fans were glad they went.

This year — unlike in the past — you can buy reserved seating tickets for different places on different days. Some say it’s better (and more expensive) to sit high above the roar. You can get a ticket for a single day or all three.

General admission tickets are available for all three days. These allow fans inside the racing area, wander where they’d like and get into the Indy Car paddock area, as well as sit in the grandstands on Friday only.

Kids 12 and under get the best deal — their general admission tickets are free with a paid adult ticket. Here’s a good set of FAQs.

Unless things get dicey, the races go on in spite of rain. Bring an umbrella, buy a poncho or head indoors for the kids fun zone or the Indy Car paddock.

Races go on, rain or shine.

“Unless there is flooding on the track, the cars will race,” Curley said.

Of course, that’s part of the fun. How will the cars react? How will drivers change their strategy?

5 Attractions and distractions, besides the race

You know there will be plenty of food and souvenir vendors, even an all-you-can-eat Crab Tent. “It’s Baltimore so we should have one,” Curley said. Some of the other attractions will be worth a look. The Family Fun Zone — inside the Convention Center —  will have entertainment, face painting, a rock climbing wall and other activities for the younger race fans. Admission is free. Bands will provide live entertainment throughout the racing area.

Maybe you remember the Pinewood Derby from Cub Scout days? Find your car (or your kids’ car) and bring it to the Petite Grand Prix. Or build one on site, too. It’s for all ages. “You do not have to be a Boy Scout. You don’t even have to be a child,” Curley said. And it’s free.

Everything will close around 7:30 p.m. so race fans can get out into the city, visit the Inner Harbor or Fells Point to take in the sights or have dinner.

6 Now that you mention it I’m hungry.

Fells Point’s restaurants and taverns will be open long after the racing is done.

If you haven’t found all you can eat on the Grand Prix circuit, Baltimore has lots for you to enjoy: crab cakes everywhere, pasta in Little Italy, ethnic choices up Charles Street and around town, burgers, beer and fine dining in Fells Point (pictured above) and Federal Hill. And I haven’t even mentioned Harbor East or Canton. Look here, here or here for some inspiration.

Considering the crowds, I’d make a reservation. Open Table isn’t paying me to say this, but its app and website offer a good way to figure out what’s available and close to where you’ll be. 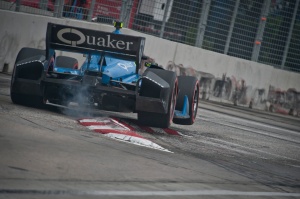 Featured races are Saturday and Sunday — but the racing action starts early on Friday with practice sessions and qualifying heats.

Gates open at around 7:30 a.m. And the plan is to have racing going on all day long. Early morning practice and qualifying runs take place with races coming at the end of the day. The schedule wasn’t completely set when I talked to Curley but it’s roughly like this.

Friday’s schedule is devoted to practice and qualifying. You’ll see the cars, hear the roar, smell the fumes. Pamm Peterson, a Grand Prix regular, recommends Friday as the best day to get a good look at the whole set up, visit the booths, and see some cars racing around the track. The crowds are lightest on Friday and you can see much more, she said.

Then you’ll be ready for some serious race action on Saturday and Sunday. You’ll already have your souvenirs and you’ll have a good sense of where you want to be.

So arrive early to get a good look at all the contenders. Stay late to see the featured races. And plan where you’re going after the race day ends.

The fun goes on until the final trophies are awarded.

And a bottle of water. This is Baltimore in August, hon. It’s probably going to be hot and humid. And don’t forget the sunscreen and a hat.

And an umbrella or poncho.

Wear comfy shoes. “Be prepared to walk a lot,”  Peterson added. The bridges over the track are high, the schleps between all the booths and vendor stands are long. (And you’re going to want to see it all.)

The Charm City Circulator is free and has a great smart phone app.

You can buy a parking pass with your tickets — or you can rely on the Light Rail and Charm City Circulator. They’ll be crowded, no doubt, but they’re cheap — the CCC is free —  pretty reliable and run right along the race action. Everything’s crowded so these can whisk you away from the crowds and get you to another part of town with little effort.

Keep in mind the Circulator’s stops are affected by the race’s route. Last year the adjusted route was available in a printed brochure and on the website. Buses start running at 6:30 and keep on going until midnight on Friday and Saturday and 9 p.m. on Sunday.

Smart phone users might want to get the Charm City Circulator app — it keeps riders apprised of approaching buses, and has maps and other good info. If you’re new to public transportation, you might want to download the MTA’s visitor’s guide. It’ll help you get around.

Boaters have discovered that the parking is easier in the Inner Harbor. If you want to bring your boat, you can take your chances or reserve a spot, according to Barry Robinson, chief of transit and marine services for the Department of Transportation. Call the Baltimore dockmaster at 410-396-3174 or go to the website or get the brochure.

Just for fun–the marketing manager at the Royal Sonesta Harbor Court Hotel let me know of a Grand Prize for the Grand Prix. Let me know if you are the winner!